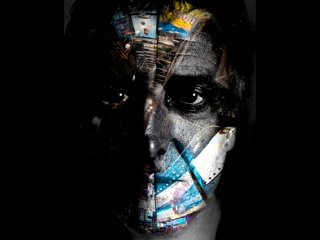 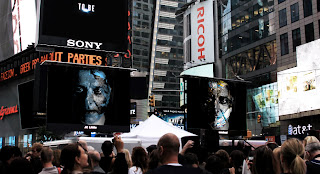 The works of thousands of selected artists from around the globe
were displayed on huge LED screens located in the midst of Broadway
and 43rd Street during an unusual art event called ART TAKES TIMES
SQUARE, at that specific location. Qualified to be part of this
immersive group show with screenshots of a 2011 time based work,
CITIES IN MY HEAD, here's a visitor's shot from that work
at the event in New York City, above.

The original time based source aims at the discrepancies of
human individual existence in expanding modern metropolises;
experiencing external mass media communication overloads,
increasingly conflicting with qualities of a basic human pace.
The visual work itself consists of an image sequence of urban
scenarios, projected onto a still portrait of the artist.

since 1989 exhibitions and media installations